Ten by Intense (N10Z) is a masculine fragrance that has been created with pheromones – naturally created chemical attractants that are released as silent signals that are transmitted through the air from one man to another. Decidedly masculine, yet clean and fresh. Since fragrances are designed to stimulate the senses, it only seems natural that the fusion of pheromones and colognes would occur. They would only have one purpose, and that would be to make whoever is wearing it seems irresistible to others that are around them. 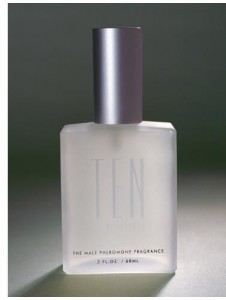 Ten by Intense has a long-lasting scent that is masculine, but not overpowering. It is also extremely clean and fresh smelling. It has been described as a high energy scent that has great expectations. The smell is that of slight citrus, an ocean breeze, that is all brought together by patchouli oil and cedarwood to create an aroma that is stimulating to the senses. Ten by Intense is described as male pheromone fragrance.

As with other products, the results achieved from Ten by Intense will vary from person to person. Having tried numerous pheromones in the past I decided to give this a field test and compare my experience with other brands.

Long story short, I was at a bar with a friend of mine, with no intention of engaging women that evening. Just a night out to catch up with my friends. After an hour or so he wants to hit up this cutie who was with her girlfriend (they sat next to me at the bar).  So he asked me to be his wing and take on the second girl.

I had applied a few pheromone squirts on my pulse points prior. This girl had a nice body but unfortunately, she didn’t show any interest in me or even acknowledge my presence. One of the problems in reviewing N10Z is we do not know the pheromone concentration which makes it difficult to gauge how much you would wear and whether it’s working.

I tried N10Z again the following weekend and approached five girls in three bars in one night. The first 4 went nowhere. There may have been some interest with the fifth girl but it was not very strong.

We changed the venue again, this time a bar with older folks (Age >25). I was walking around, doing “minimal game”. So I walked around, making eye contact, saying cheers to girls, but mainly flirting with my eyes. My friend approached a girl and talked to her. I started making eye contact with her friend. She started to ask me “Interview” Questions like “Where are you from?”, “How old are you”, “What do you do?”.

There was no way for me to get out of the social interaction. I should have said to her much earlier “Let’s get out of here” when her brain wasn’t working. Unfortunately, N10Z did not seem to help one bit.

So I said, “Let’s get out of here”. She declined. I kept my cool. When you get rejected, always stay cool. In fact, I always say the word “Cool” and look in a girl’s eyes, as if I’m not moved by her rejection and as if I know, that she doesn’t mean it. I asked again. She declined. After a couple more interview questions, the energy was gone. She went back to her friends.

It has a strong refreshing smell which a lot of guys seem to like but the amount and type of pheromones used are not disclosed. I was unable to confirm if N10Z actually contains pheromones and from my three encounters above I am not so sure.

Overall, N10Z is a great smelling men’s cologne… however, whether it’s truly a pheromone cologne is unknown.  Buy it if you want a nice fragrance but not if you are looking to get noticed. Unfortunately, wearing N10z led to too many rejections for me. If you are looking for a high concentration pheromone cologne I recommend checking out Pherazone.

You can read my review here and see how it stacks up against other brands. Currently, Pherazone has the highest concentration of any pheromone product on the market with 36 mg per fluid ounce. They offer a 30-day money back guarantee on all of their products which are only sold online.

If you’ve heard of pheromones you may have seen the report done on ABC’s 20/20 news program regarding the Athena Institute. We put Athena pheromones to the test to see if they really worked. Dr. […]

Turn Up The Heat

Turn Up The Heat pheromones is a product that makes some very bold claims. Whether it is in casual everyday meetings or in nightclubs, this pheromones product is intended to deliver exceptional results. But, can […]